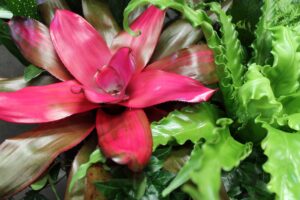 Genetic engineering has been a hot button term in the plant world for a few years now. Generally, it’s associated with mad scientists pumping foreign DNA into tomato plants to turn a profit. However, one scientist, Kathleen M. Pryer of Duke University, set off some interesting research in 2004 with a study tracing the evolutionary history and comparing the DNA of 45 different species of ferns.

The study proved that about 100 million years ago, with a single evolutionary burst, ferns expanded into the many species we know today. In fact, 80% of all fern species identified contemporarily are believed to have stemmed from this one event.

These ferns developed a light-sensing protein known as neochrome that allows plants to thrive in shady environments. In 2011, a grad student of Pryer’s, Fay-Wei Li, started searching for a light-sensing gene that bridged the gap between neochrome and genes that demand plants use direct sunlight. He didn’t find it.

Until the University of Alberta unveiled a new database of DNA from hundreds of different plants. Li found his gene – in hornwort. Hornworts are only distantly related to ferns. So what was the missing link doing there?

The only hypothesis that seemed plausible was that ferns picked up their neochrome genes from intimate contact with hornwort about 180 million years ago, instead of the gradual evolution within the fern lineage that had been the hypothesis until recently.

Foliage Design Systems Jacksonville is always interested in any new research that can tell us more about how plants function and what will help them to thrive in your office or home setting. Contact us today to bring some green inside!

« What’s Killing Your Office Plants?
What is a Living Wall? And Does Your Office Have One? »

Get In Touch With Us